Presentation of the document on the “Scope of infrastructure”

On Thursday, October 6, a new #CharlasCEPSI colloquium entitled “Infrastructure scope” was held. This space for debate and dissemination provided by the Commission of Engineering Service Provider Companies (CEPSI) dependent on the Argentine Center of Engineers (CAI) was the place chosen by the members of the commission to present a fundamental document that establishes new reference concepts.

The colloquium was opened and moderated by Eng. Ángel Ferrigno, Pro-Treasurer of the CAI and former President of the IATASA organization, who, before introducing the speakers, made a brief historical overview of the creation of CEPSI; as well as delving into the vision, mission and recommended practices developed by the CAI.

The first speaker was the Director of Infrastructure and Engineering Projects of our company, Eng. Bruno Agosta. During his presentation, he highlighted the importance of having created a document where there is a unified language to define the scope of infrastructure projects. “This matrix serves to homogenize guidelines in the contracting stages between clients and suppliers and unify, in some way, the definition in each stage of the process and thus know what we mean”, remarked Mr. Bruno Agosta. The intention of finding an equivalent language collaborates to unify criteria between the client and the provider and thus achieve added value in the future.

In relation to the importance of engineering on the ability to influence the final value, the Director of Infrastructure and Engineering Projects at AC&A stressed that “investing in early stages has a resounding influence on the final result.” And he added that, as a result of the cost analysis, it is essential to focus the value in the early stages of the projects because the more progress is made in each phase, the more any modification influences the costs. 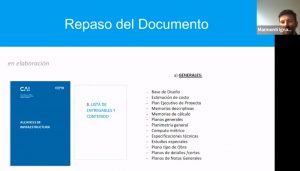 Then it was the turn of Eng. Ignacio Marmonti (Civil Specialist – AESA) who pointed out the structure and content of the practice. The civil engineering specialist made a detailed definition of each of the Engineering stages in infrastructure projects such as: Pre-feasibility, feasibility / Conceptual Engineering (CI), Draft / Basic Engineering (IB), Project, Detail Engineering (ID) and the relationship between the scope of each engineering instance and the uncertainty in the final cost estimate.

The second point of the document in which Marmonti deepened covered the scope of engineering in infrastructure of each stage. In this item, Pre-feasibility, Feasibility / Conceptual Engineering (CI), Pre-project / Basic Engineering (IB), Project Engineering and Detail Engineering (ID) were defined.

The third speaker was Eng. Ignacio Carrique (Discipline Leader – TECHINT) who delved into the development of each of the annexes presented in the document (Urban railways, trains and trams, Ports, Storm drainage, Dams and Hydraulic works, Road, Railway, Airport, Transmission and electrical distribution and Potable treatment plants). At the end of his colloquium, Carrique invited “end customers to participate and get involved in the annexes” to achieve a general improvement.

Along these same lines, Mr. Bruno Agosta explained that defining and standardizing these stages collaborates in a collective construction: “the improvement of this document will benefit from the recommendations and suggestions of our colleagues. We are more than open to listen to review, improve and keep moving forward to arrive at the most refined practice possible.”

At the end of the webinar, Eng. Ángel Ferrigno invited everyone to enter the CAI website to access the document link: https://cai.org.ar/comisions/cepsi/practicas-recomendadas/